Share
Lumens vs Candela vs Lux and looking for the best tactical light for your needs being it handheld or weapon mounted.
I get confronted a lot with the never ending lumens discussions: “more is better”, “less is better”, “90lm is more than enough”, “you’re gonna blind yourself with 1000lm”, … What is too much lumen? What is just enough?
But what does Lumen really mean? And what about Candela and Lux. Ever considered those values when choosing a light? A lot of lights get advertised with just the value of Lumen. You probably received ads with lights which are milspec and put out 3000 lumen for 9.99€ …. But what do those Lumen mean and is it the right way to determine if that light is the one for you. Lumen has become a general factor when advertising tactical lights but manufacturers hardly ever add information concerning Candela or Lux.
Lumens, Lux and candela are three lighting measurement units, but they measure different aspects of a lighting device. Knowing about the difference between lumens, Lux and candela will help you choose a tactical light which suits your needs.
Lumen is the total amount of light that a light source produces without taking a beam (reflector) into consideration. For example, two different flashlights with the same amount of Lumen could have a very different level of brightness in regards of illuminating an object at a distance.
Lux is the measurement of the amount of light present at a specific distance on a specific surface. For example at 10m on a 10m² surface. Lux in itself isn’t used to determine the “strength” of a flash light but is used to determine Lumens and Candela.
Candela, which comes from the word Candle Power, is the amount of Lux at 1 meter measured at the brightest part of the beam. Candela says something about the power of the light but nothing about the total amount of the light. 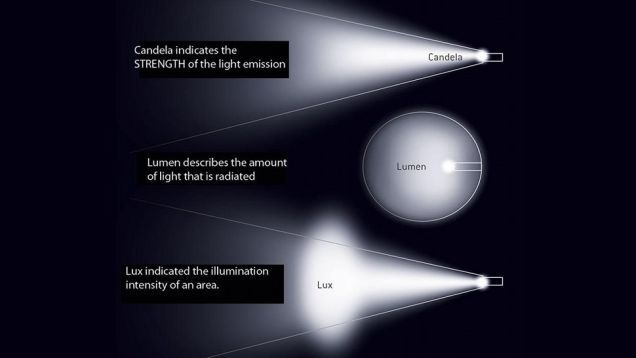 So, it comes down to what?
It all depends on the reflector of the light which produces the beam. And the tighter the beam the more candela it will produce resulting in more Lux but with the same amount of Lumen.
If you look back at the beginning of this article, questioning yourself: What is too much lumen? What is just enough?
My personal opinion on the subject is the following:
First off, Light = Information = Problem solving. If you are running your OODA loop in a SHTF situation, you need as much information as possible in order to Orient, Decide and Act. So the more light the better.
But …
The choice of the light needs to be in regards to the weapon system its mounted on or used with and also in regards to the capability of the person using it. It comes down to the fact that you choose a light in accordance to the situation you will be using it in and the capability of the firearm. For example, do you need a light, mounted on a pistol, that can reach 200m? That said, it also comes down to the training needed to use that specific light. You need to know the capability of the light and use it to your advantages. Train with your equipment and get to know it!
So, whatever you happen to need for your current use, try to consider the following:
Do you need something that reaches far? High candela is what you want, and usually getting that range means you need either decent output (lumens) or a large reflector (which means a VERY narrow beam, higher lumens allow for the same range with a wider beam).
Do you want something very floody to light up a wide area? Then you won’t really care about candela/intensity.
Candela per lumen is one of the most useful stats for getting an idea what a light’s beam is like.
And there is also the aspect of beam pattern. But that’s for another article ;-) So stay tuned.