First off, we’ll look at the anatomy of a beam. 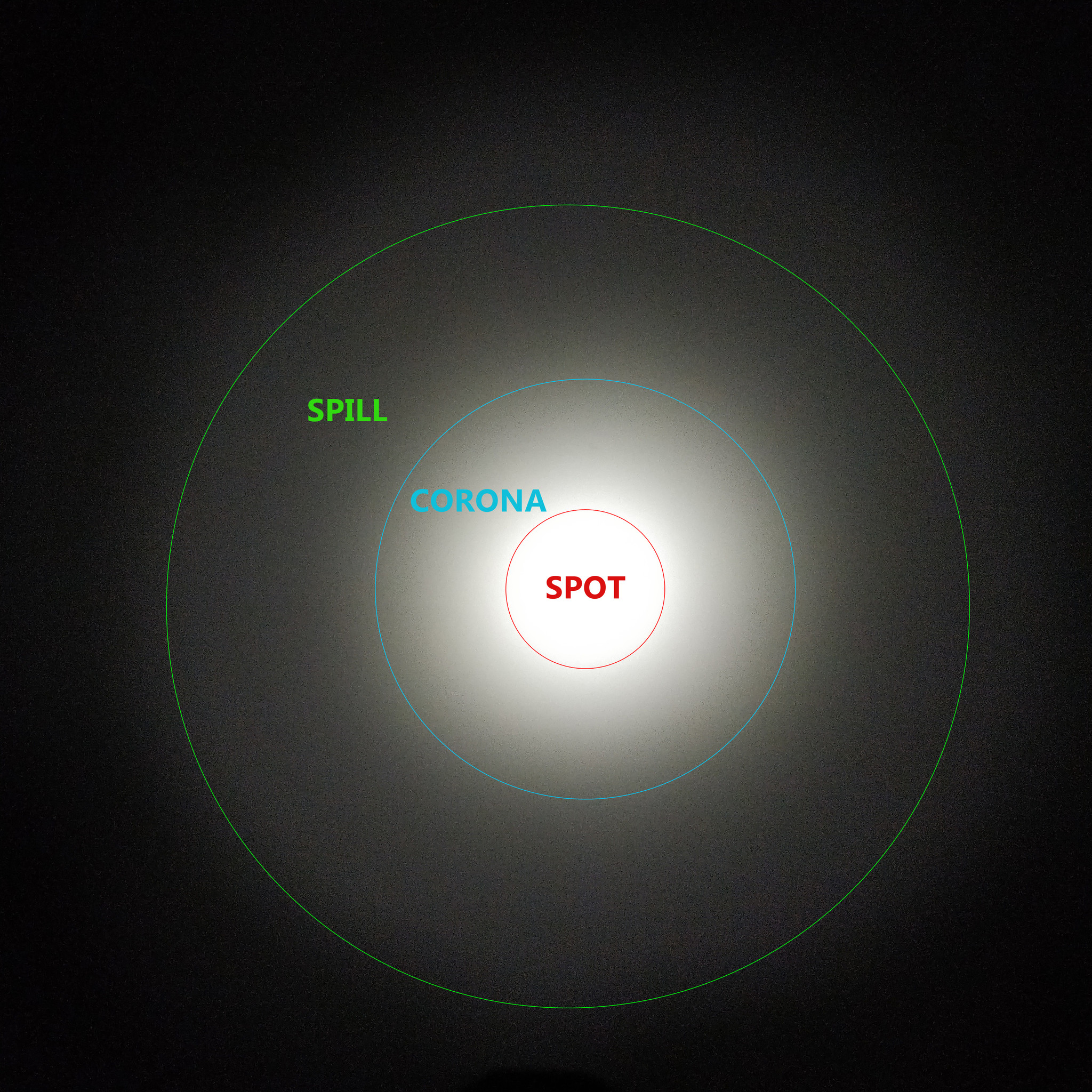 In general, when we look at a flashlight beam we can define 3 zones: Spot, Corona and Spill. In some cases one or two of the zones may not be present due to the type and construction of the reflector. It could be that the corona is missing or even the absence of both spot and corona which will eventually define the use of the flashlight. 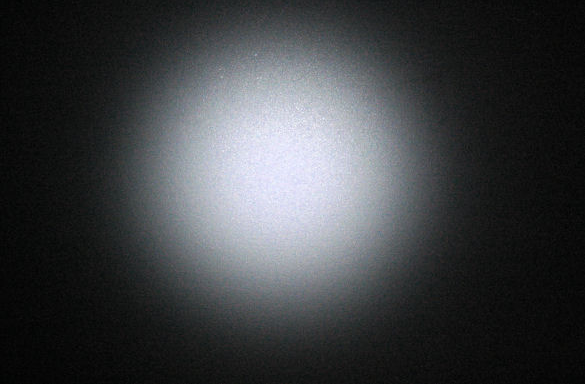 Beam patterns:
Beam patterns are generally related to the reflector and in some cases the lens. Some brands provide the option to change beam pattern by turning or push/pulling the lens in order to get a wider or narrower beam. I am not a big fan of the latter because this could be a failure point.

When looking at the lens, most brands use scratch resistant glass. It’s important to keep your lens as scratch free as possible because it is the final barrier between your light source and the world and could influence your beam.

Some flashlights have a raised bevel around the lens to keep dirt and debris away. Manufacturers opt to install a serrated or toothed bezel to be used in self-defense. Always store your flashlight in a holster or pouch.

• Smooth reflector: Ideal for a long throw, helps direct the light into a strong spotlight. Spot and spill are clearly defined
• Orange Peel reflector (OP): Ideal for a distributed beam with a wide angle. The transition between spot (if there is one) and spill is very smooth. 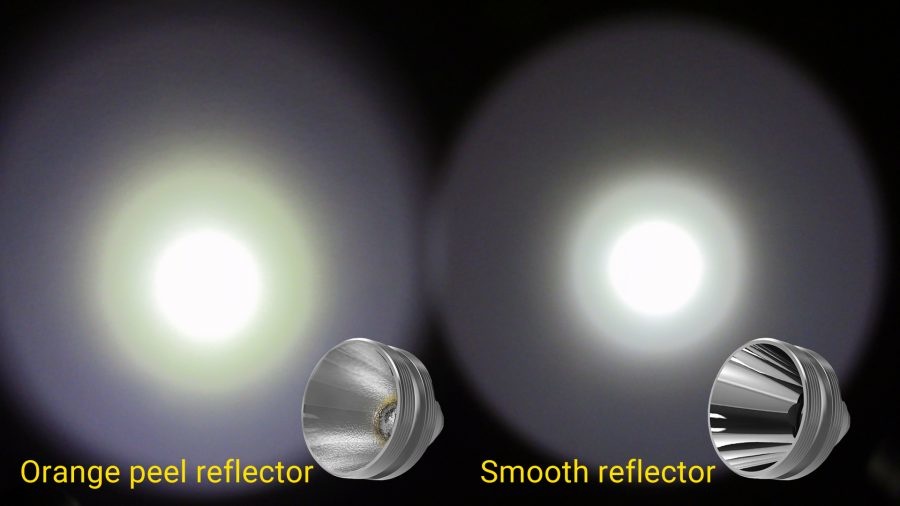 The two extremes in beam patterns are throw and flood.

When looking for a flashlight that has a good amount of throw to it there are certain features you'll want to look for. Obviously, the first of these features is going to be the actual beam throw. Most flashlights will say either in the product description or on the box how far the beam reaches. But don't fall in the trap as I mentioned in part 1 concerning flashlight add with 1000+ lumen that can reach hundreds of meters away.

Many throw lights also have a longer body design. Particularly the head of the flashlight will be longer due to the deep reflector which is another aspect you want to look for. A deep reflector will allow the LED to really throw the light.

When looking for a flashlight that has a good amount of flood to it, you'll often notice a shorter head on the flashlight. The reflector itself will be a lot shorter.

Depending on the general situation and environment you will be using the flashlight, the beam pattern is an important factor to consider. MILES personnel will preferably opt for a defined spot which has a lot of throw, a technical inspector for example would probably prefer a wider beam with a lot of flood with no spot at all.

In the following examples you can see the clear difference between two lights. The Tactician (800lm) is a light which has a lot of flood compared to the X300 (500lm) which has more throw hence the spot. 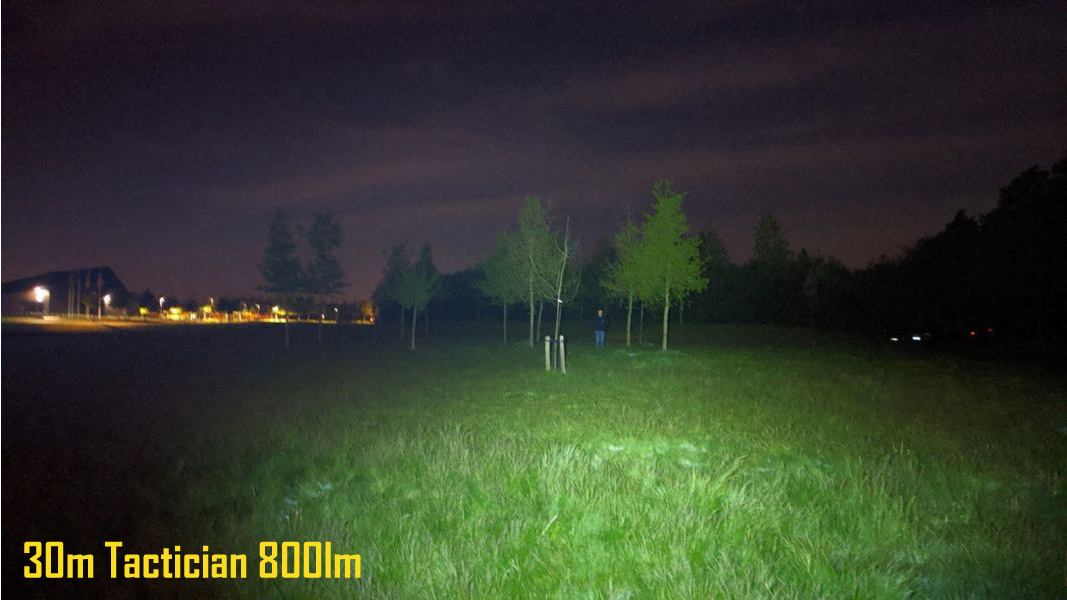 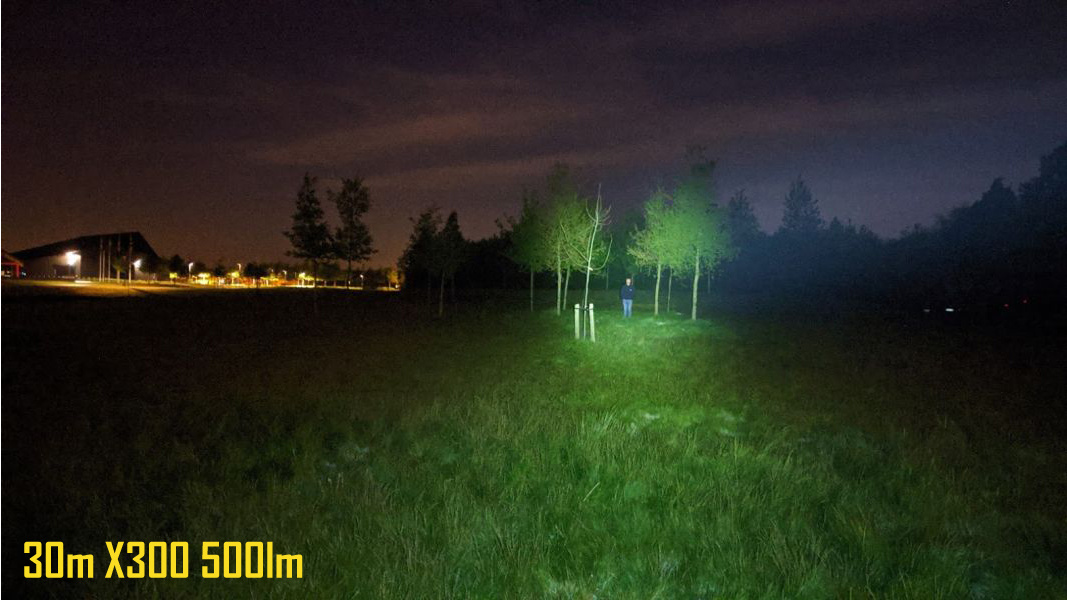 In a tactical low light situation, you need to get a PID (Positive Identification) if the person in front of you is a threat or not. You need the spot to dominate and control the possible threat and use the spill for PID. 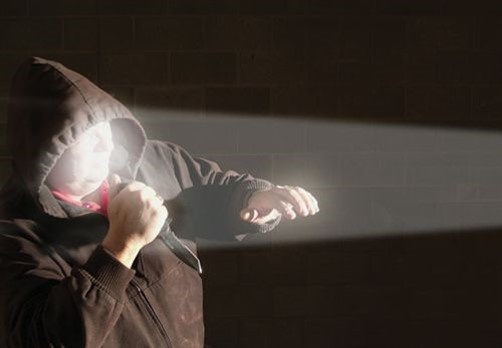 Color:
When looking at the color of the light we can also define different tints per brand. The color of the beam is derived from the light source itself being incandescent or LED. As Incandescent isn’t a popular option anymore we won’t be discussing it. But yet, everyone remembers the yellowish warm tint from somewhat older flashlights like the Maglite series. 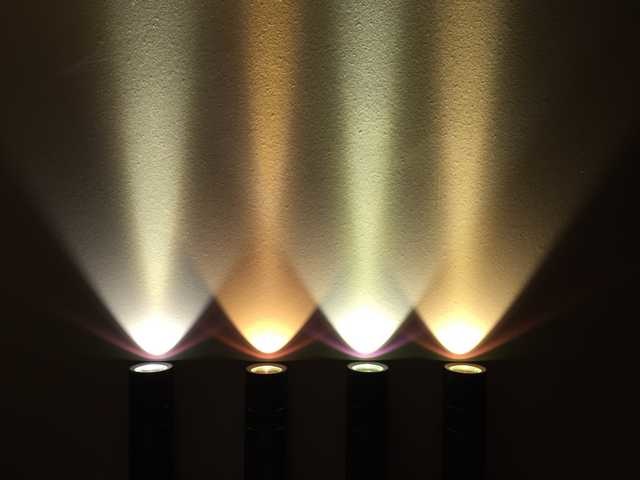 The LED (Light Emitting Diode) is where the light is emitted from and therefore is one of the most important parts of a torch.

LED’s come in all different sizes and shapes. The most popular brands are Cree, Nicha, Osram, Luxeon, … just to name a few. Each brand is continuously pushing the envelope in order to put the most punch in an as small as possible form factor, keeping the limitation of the power source into mind. Nevertheless, batteries have come a long way since de D and C cell ;-).

Every light source has a Correlated Color Temperature (CCT) which identifies the color tint of the light. CCT is measured in degrees Kelvin. Kelvin is derived from heating a solid piece of metal and the light it produces at a certain temperature. Heated metal starts out at a red orange glow (1000K) and goes up to yellow (3000K), white and even blue (5000K). 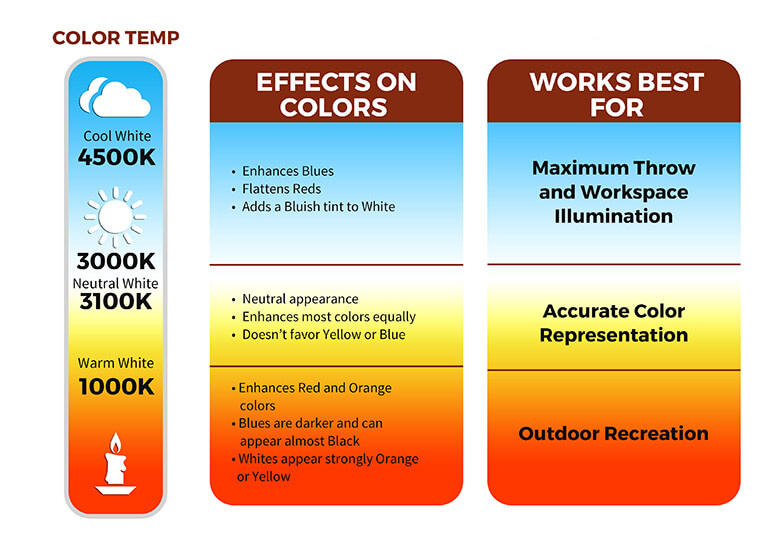 So, what is the best color temperature?

Color Temperature is a very important factor when selecting a flashlight. Don’t just buy a flashlight because it is super bright or looks cool. Knowing how you will typically use your light will help you make the right choice. Personally, I always try to go for the Neutral White options. I prefer the higher Color Rendition and feel that they are bright enough for almost anything I need, while still being easy on the eyes. Although each has its strengths and weaknesses, and best usage scenarios, the choice usually comes down to your personal preferences.
Most manufacturers note the color temperature on the box, in the manual or on their website.

Driver:
Last in this part 2 but not least I will talk about the driver.

The driver is a small transformer that takes the energy from the battery and makes it into a usable form of power for the LED. It also limits the current to the LED. The driver is also responsible for any modes the torch may have, such as SOS mode, Strobe mode or high, med and low modes.
An important factor in choosing a flashlight is looking at what voltages (batteries) the flashlight (driver) runs on. This will ensure you that you can use different types of batteries. For example, if the manufacturer installs a driver that can handle between 3 and 9 V, you are good to go with double CR123 and single 16650 batteries. 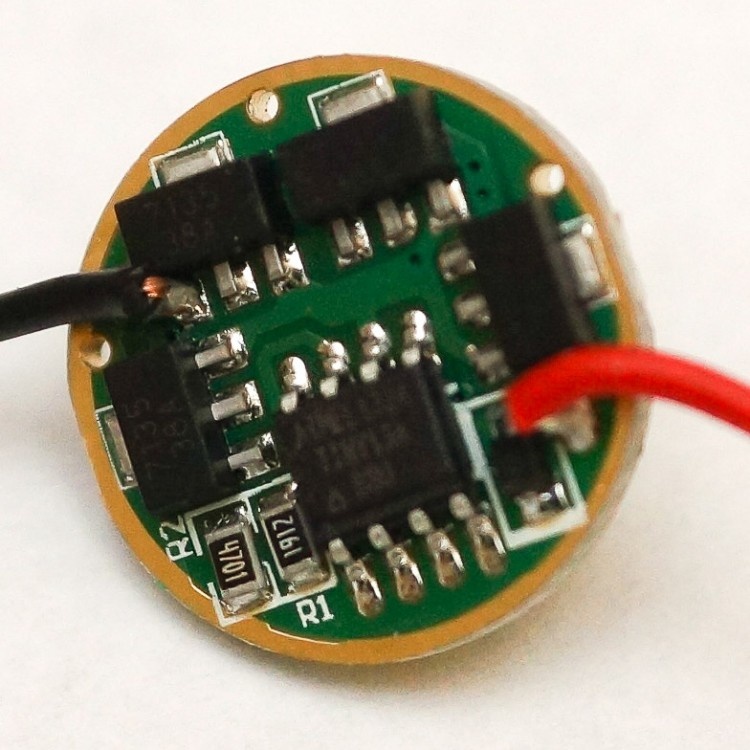 In the last part of choosing the perfect tactical light we will talk about the different features like switches, batteries etc., so stay tuned. 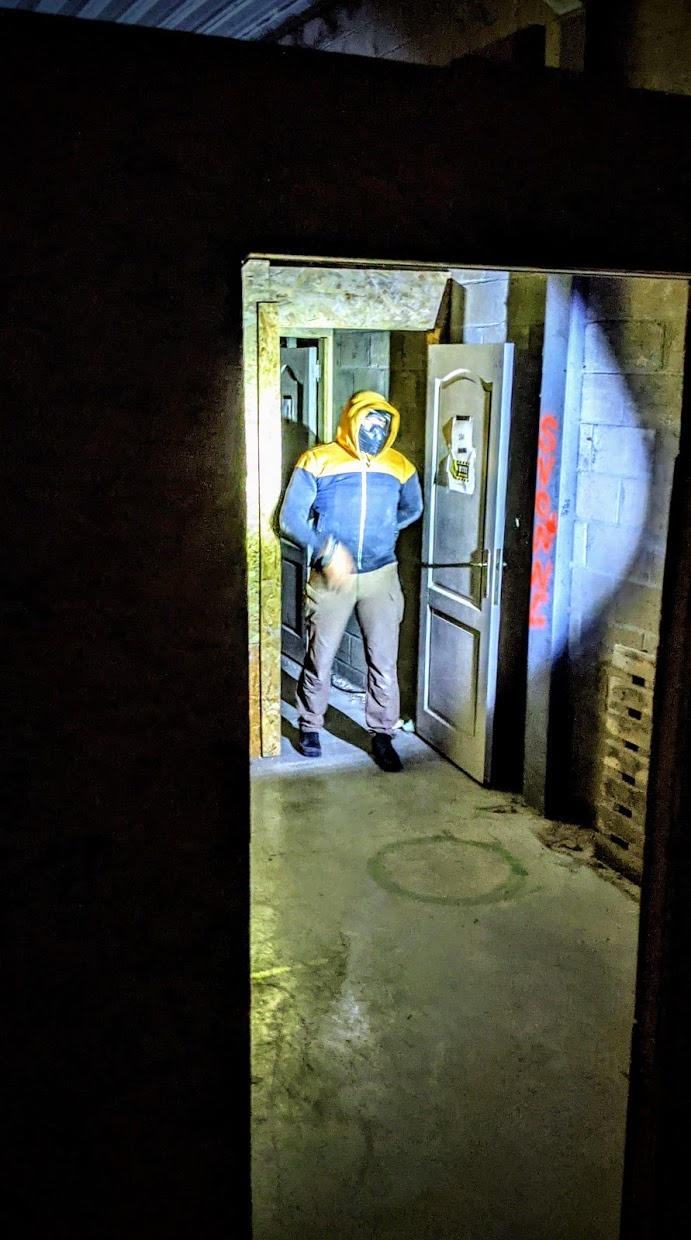